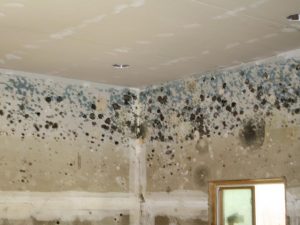 Can you live in a house with black mold?

Black mold is not something we recommend to leave untreated. Mold Remediation Atlanta GA Pros will often recommend a free mold inspection immediately. Black mold is very hazardous to your health. Here is the source to a article by Everyday Health for informative information the dangers to your everyday health: https://www.everydayhealth.com/healthy-living/healthy-home/hidden-dangers-black-mold Black mold – the often invisible, toxigenic substance – can grow inside homes, schools, and the workplace undetected for years and fueled by damp conditions. Exposure to mold increases the risk of health problems such as asthma, allergies, and even depression.

The Hidden Dangers Of Black Mold

Black mold – the often invisible, toxigenic substance – can grow inside homes, schools, and the workplace undetected for years and fueled by damp conditions.

Exposure to mold increases the risk of health problems such as asthma, allergies, and even depression. According to a 1999 Mayo Clinic Study, nearly all chronic sinus infections, which afflict 37 million Americans and are often mistaken for the common cold, are a result of mold exposure.

Allergic reactions to molds are not seasonal, and can happen throughout the year. Use the following guide to find out how to spot mold as well as how to determine if your chronic health condition was caused by mold exposure.

Silent, Often Invisible, and Dangerous
Molds are often referred to as black mold, although color and composition vary. Some molds can be seen and touched, even ingested, and that can cause irritation.

Generally speaking, mold grows where the air is humid. Most will not cause harm, but in large quantities, or when the conditions are right for the mold to produce toxins, adverse health conditions can result.

Mold hides in places like cabinets, basements and crawl spaces, in drywall, and areas with water damage. Bathrooms and kitchens can be breeding ground for mold spores, because of water use and lack of proper ventilation.

It may appear as mildew on a shower curtain. Yet some of the most dangerous types of mold are invisible, are airborne and go undetected, thereby lengthening exposure time and causing the most harmful health problems associated with mold.

Toxins can affect the body’s central nervous system as well as the immune system, and molds are in the toxin category. When the body is confronted with toxins, its functions are compromised, specifically those located in the frontal cortex, where problem-solving, memory, and impulses are controlled.

Who Is Affected By Mold?

Some people, simply because of genetic and chemical factors, are more sensitive to mold than others. Small amounts of mold may trigger a reaction in one person, and have no visible effect on another person in the same living space and under the same exposure.

Age and general health can also be factors in reactions to mold. The elderly, those with compromised immune systems, those who already suffer from respiratory illnesses, and children may be more affected by mold than a healthy adult.

Physical signs of mold exposure can range from itchy, water eyes to asthma and airway problems. The body reacts to a mold that may not otherwise be toxic by exhibiting allergy-related symptoms, such as an irritated throat, coughing, or a runny nose.

For some people, the reaction may be more severe, causing nausea, fatigue, sinus infections or trouble breathing. In more extreme cases, fungus can produce volatile organic compounds, which can affect the central nervous system and cause headaches, dizziness, difficulty concentrating and decreased attention span, according to www.toxic-black-mold-info.com.

The Environmental Protection Agency also has information on mold and how to combat it and protect yourself and your home.

Documentation of the dangers of mold, the result of studies being undertaken by countries around the world, is pointing toward an increase in the prevalence of the health problems mold can cause, particularly in children.

When a child’s immune system, which is still maturing, is exposed to mold or antigens, his or her body may react abnormally, creating problems with development.

According to the National Institute of Environmental Sciences extreme exposure can result in death.

The Mold You Breathe

Taking in certain kinds of black mold through the nasal passages could kill cells needed for the body’s sense of smell, according to a 2006 study at Michigan State University’s Center for Integrative Toxicology.

Researchers used mice for the study, and found that a toxin from the black mold spores caused damage to the nose and the front part of the brain, where the sense of smell registers.

The toxin found in black mold, also known as Stachybotrys chartarum, also irritated the nasal passages of the mice, which are similar in cell structure to humans.

Since memory is triggered by the human body’s sense of smell, the potential for memory loss as a result of exposure to black mold logically follows.

Several infants died in Ohioin the mid-1990s from lung damage after they were found to be living in homes with high levels of mold.

Their bleeding lungs were believed to have been damaged by something toxic in the air of their homes.

Mold May Affect Your Mood

A link between the body’s exposure to mold and depression was the topic of a study released in August 2007 by a research team at Brown University and published by the American Journal of Public Health.

While the researchers didn’t establish a direct connection between mold and the onset or risk of depression, they did find that people living in damp, moldy homes were more likely to suffer from depression.

This was likely due to the health issues they faced as a result of their exposure to mold (fatigue, cold symptoms), and a mental health aspect: the perception of a lack of control over their housing environment, according to the study.

Methods for Preventing and Dealing With Mold

The best way to arm yourself against the health dangers of black mold is to do a visual inspection of your home (and then your workplace). Your nose may give you the first sign that there is a problem, however.

Musty odors are a good sign that there is mold living somewhere.

If you do find mold, clean with a bleach solution and make sure the area is properly ventilated. Install fans in the bathrooms, and repair any pipes that leak.

Windows, especially those in older homes, are notorious for mold build-up; the first sign of a problem may be condensation on the glass.

Clean kitchen areas and bathrooms occasionally with a bleach solution.

Use a humidifier in rooms where the air is moist, especially in the basement. And be sure to change the humidifier’s filter regularly, as mold can build up quickly on a damp surface.

Empty the water between uses to prevent mold from building up on the water’s surface.

Other places where mold is likely to grow: in areas that have flooded, water pipe leaks, leaky roofs, condensation on walls and ceilings (look for discoloration), windows, rust, peeling paint, tile grout, gutters, and warped wood.

Homes with many houseplants could be susceptible to mold growth; be careful not to over water.

Check the ventilation of home appliances, such as dryers, which should be vented outside.

Air purification and filtration systems, which can range from reasonably priced to expensive depending on how elaborate the system is, are another option for homeowners and business owners. Central air conditioning with air filtration attachments are also available.

Mold tests are available at most home improvement stores, and allow for the testing of both air and tangible mold samples. But they may not give the whole story. There are companies who specialize in air quality diagnosis and rehabilitation, but they can be expensive.

The Toxic Black Mold Information Center recommends trying to find the source of the mold on your own before taking any further steps.

Steps to Prevent Mold After a Basement Flood

What Can Mold Do To Your Body?